Welcome to the KwaZulu Natal

Known as the Zulu Kingdom

Enticing, spectacular and fascinating, the province is a subtropical coastline, with savannah heading east towards majestic Drakensberg mountain range in the west. KwaZulu Natal's beaches are along the warm waters of the Indian Ocean, and are some of South Africa's most popular holiday spots. It is a multi-cultural showpiece destination.

Kwa-Zulu Natal is also known as the Zulu Kingdom and has eight different destinations, each offering its own unqiue set of experiences. It is a kaleidoscope showing you natural wonders, ultra-modern facilities, fascinating glimpses of a multi-coloured people, a history rich in heroic deeds, bloody battles and ultimately reconciliation, and this is all set against a majestic backdrop of sun, sea, mountains and sky.

Durban is a sophisticated cosmopolitan city of over three million people. A city where east meets west it is known as the home of Africa's best managed, busiest port. It is an exciting city in which to play, shop, experience the nightlife and relax. It is a city in which to do business also. The world-class International Convention Centre has hosted an historic line-up of events including conferences of a global scale. Also known as the playground of the Zulu Kingdom, there are so many things to keep you busy in Durban, such as a marine world, the wharf, the BAT centre, fine restaurants, entertainment and shopping, craft markets, beachfront stalls, theatres and clubs, township tours, nature sanctuaries and parks, the Botanical Gardens and so much more. You can sail, swim, run, play tennis or stroll along or relax on the sun-drenched beaches.

Battlefields - Shaka, Winston Churchill, Mahatma Gandhi and General Louis Botha were all famous military strategists who walked through this place many years ago. Lone forts and small graveyards on these undulating landscapes with rocky outcrops make visible the secrets and sorrows of great battles, sighed and whispered by the wind. The Battlefield sites, historic towns and national monuments are testimony to the critical, blood-soaked conflicts which are the legacy of this place. Tours can be taken of the Battlesites, but if you wish to take on a more adventurous route you can go white-water rafting down the rapids of the mighty Tugela, sail on the Chelmsford Dam or hunt in the designated hunting reserves. This region offers all these pursuits.

The elephant coast is a pristine eco-wonderland boasting 21 different ecological systems. Some of the world's highest natural dunes, brilliant coral reefs, fever tree and palm savannahs, papyrus swamps and rolling acacia bushveld can be found in this land of natural and cultural diversity. It is home to the Zulu and Tsonga people as well as the Greater St Lucia Wetland Park, declared South Africa's first World Heritage Site. Accommodation ranges from luxury game lodges to Zulu homestays and camping. The sea, lakes and beach provide more adventure. Scuba diving and snorkelling enable you to watch the 1200 different species of marine life abounding in these waters. And taking a turtle tours is a must. Angling is a great sport, whether from the 200 kilometers of unspoilt beach, on the lakes or the deep sea. While at sea you might even be lucky enough to spot a whale or two. Historical venues are the Ghost Mountains and Dingaan's grave. The Zulu and Tsonga people will share these places with you and tell you more about their history as well as their traditional way of life.

The South Coast is a very popular holiday destination, with it's sub-tropical forests, blue lagoons, golden beaches, rocky coves, warm Indian Ocean and sunny weather. There are three beaches which have International 'Blue Flag' status, namely Ramsgate, Marina Beach and Lucien. The South Coast is also known to many as 'The Golf Coast' because of its nine excellent 18-hole golf course, two of white are rated amongst the top 12 in the country. The Umtamvuna Nature Reserv conserves plants found nowhere else in the world, and you can view 400 species of birds along this coastline. Scuba diving is a popular past time and you will find excellent diving areas at Aliwal Shoal and Protea Banks. You can also go abseiling in the Oribi Gorge. The scenery around here is absolutely breathtaking.

The North Coast is also known as the Dolphin Coast and stretches from Zimbali to the mighty Tugela River. You will find the bottle nose dolphin frolicking in these waters close to shore, all year round. There are so many things to do here, such as dining at fine restaurants, partying at the nightclubs, taking a golf course or taking to the air in a microlight. You can stroll along the coast on horseback during low tide, or enjoy some angling. As for the history aficionados you will be interested to know that Shaka Zulu is buried at Kwa-Dukuza, and Albert Luthuli, the Nobel laureate, is buried nearby. You can visit historic battle sites such as the Ultimatum Tree, Ndondakusuka or Fort Pearson, or you can walk a 'muti' trail through the Harold Johnson Nature Reserve. The Zulu people are indigenous to this part of the land, but the North Coast is also home to a large Indian community. You will find Indian temples and you can sample their spicy food.

Pietermaritzburg Midlands is home to quaint antique shops, markets, restaurants, art galleries, museums and a casino. This is where the annual Duzi Canoe Marathon starts, as is beginning and end for the Comrades Marathon. Take a picnic to the magnificent Howick Falls, or try your hand at some trout or bass fishing. For the more adventurous you can paraglide off Bulwer Mountain or slide across the canopy of Karkloof's indigenous forests.

The Drakensberg Mountains are named by the Zulu 'Ukhahlamba' or the 'Barrier of Spears' and by the Dutch Voortrekkers 'The Dragon Mountain'. With their awe-inspiring basalt cliffs, snowcapped in winter, towering over riverine bush, lush yellowwood forests and cascading waterfalls, the Drakensberg Mountains form a massive barrier separating Kwa-Zulu Natal from the Kingdom of Lesotho. The only road access is via Sani Pass, which at the top boasts the highest pub on Africa, at 3000 metres above sea level. This 243 000 hectare mountainous region known as the uKhahlamba-Drakensberg Park, has been preserved and venerated for eons since the San people or bushmen roamed these slopes. These mountains combine sheer natural beauty with a wealth of biological diversity. Tens of thousands of paintings depicting the daily life of the bushmen can be found on the rock faces. In December 2000 the park received international recognition and was declared KwaZulu Natal's second World Heritage Site. The adventurous may try climbing it or abseiling, white water rafting or taking a helicopter ride to view the mountains from above. There are also hiking routes for the less adventurous where you can view the large variety of animals and plantlife. 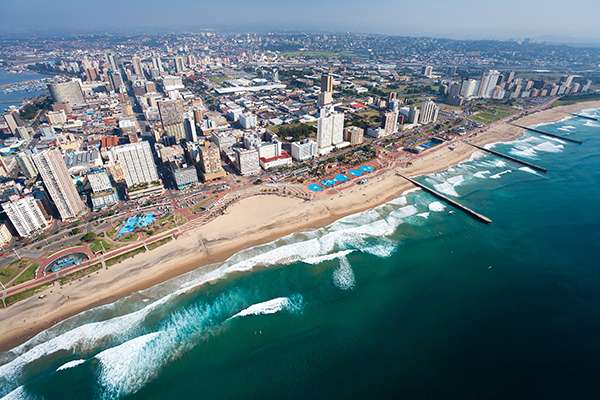 Book Your Stay In South Africa